As 2021 began, a COVID-19 vaccination rollout was in sight, and many were hopeful that the year would bring an end to the pandemic that plagued the world during 2020. Despite a largely positive response to vaccinations and some hopeful commentary from government leaders, new variants emerged bringing with them added fear and some market volatility during the second half of 2021. Undeterred by the headlines, markets were incredibly resilient as government policy remained supportive of the economy, corporate earnings growth was strong, and the S&P 500 ended the year near all-time highs. 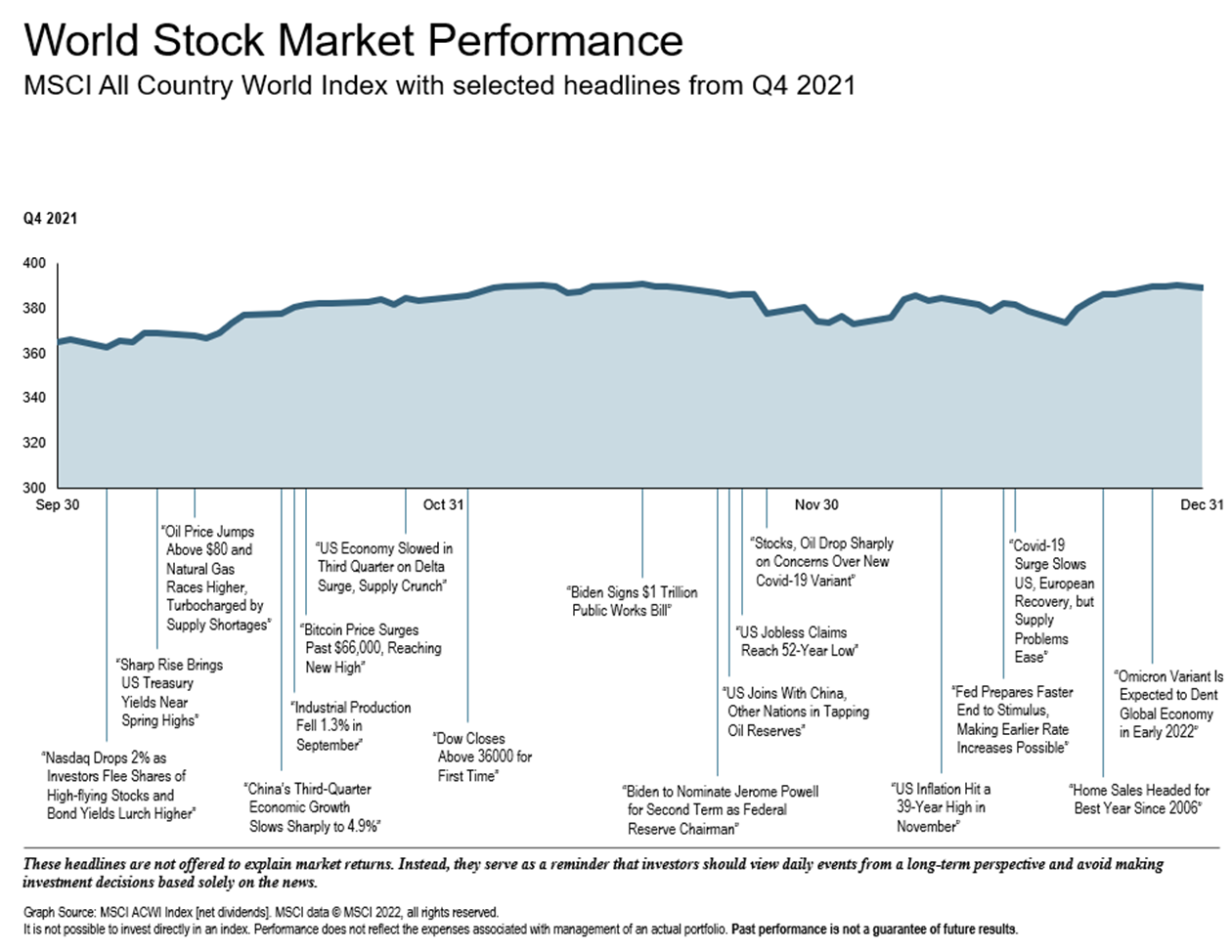 Fourth Quarter
One word that is a common thread throughout the last two years is unpredictability – and the trend continued during the fourth quarter. The beginning of the quarter brought continued market volatility but as November began, positive momentum followed. Third quarter earnings were better than predicted, COVID cases were declining, and investors received clarity from Washington. As the month ended, the detection of the omicron variant prompted a new wave of concern, resulting in a sharp sell-off. The decline was short-lived as the FED quickly reassured investors and news of lower risks from the omicron variant helped stocks rally at the end of the quarter. Asset prices generally rose, but performance was mixed across categories. U.S. stocks and international developed stocks both returned positive results while emerging markets struggled. Corporate earnings were positive for a fourth quarter in a row while bonds were just barely positive for the quarter and down for the year as investors took on riskier debt due to low interest rates.

Global Economy
Global expansion continued but momentum wavered. International markets were acutely affected by geopolitics and COVID-19 while tensions between the U.S. and China escalated. The general sentiment is that the global economy is past its peak growth, but sustained expansion is likely to continue. Vaccination progress continued, but supply disruption and labor market constraints restrained growth. As we head into 2022, more moderate equity returns are likely as central banks withdraw some monetary support.

U.S. Economy
The passage of the Infrastructure and Jobs Act in early November, and the FED’s effective communication around tapering, eased fears of inflation mid-way through the quarter resulting in positive returns for U.S. equities. Investor reassurance was short-lived with the arrival of the omicron variant temporarily sending stocks plummeting, only to rebound by the end of the quarter due to milder outcomes from COVID-19 infection and the FED’s slightly hawkish shift to fight inflation.
The U.S. stock market saw the largest gains in Q4 with large caps outperforming small caps and real estate and technology sectors posting the highest returns. Financials underperformed as profit margins were hurt by falling long term interest rates in the final month of the year. Surging inflation sent bond prices lower, while Treasury Inflation Protected Securities (TIPS) were the best-performing fixed income category for the quarter. After a rough 2020, commodities did well during 2021, with thirty of forty-one of the leading commodities posting gains during the final quarter of the year.

Looking Forward
As 2022 begins to unfold, emerging COVID variants, waning stimulus, and inflationary headwinds are potential risks. All eyes will be on the Federal Reserve as it looks to achieve stable prices and maximize sustainable employment through rate hikes in the coming months. It is important to note that, although inflation can bring investor concern, there are two types of inflation – sticky and flexible. Sticky inflation tends to stay longer (rent, insurance, medical expenses) while flexible inflation (food, energy, cars) often does not last as long. Inflation can be healthy for companies, allowing them to raise prices and enhance profitability in ways they have not been able to in recent years. Even during times of higher inflation, stocks and bonds have provided solid returns. It is mostly at the extremes that financial assets have struggled. Companies with pricing power and the capacity to raise dividends are likely to weather the storm during periods of higher inflation.

Additionally, investors will be focused on potential tax increases and mid-term elections in 2022. Stock market corrections are common during mid-cycle phases and volatility is usually short lived. Long-term risks include record-high debt, inequality, and rising de-globalization pressures. Deteriorating demographic trends including fewer workers to support the number of retirees and greater fiscal pressures such as rising spending on pensions and healthcare may also affect the economy as the system is more dependent than ever on low interest rates.

Maintaining a calm and steady approach to investing with tactical discipline is more important than ever during times of volatility. Myopic risk aversion is a common bias in which investors who review their portfolios more frequently have increased risk of loss as they react in response to their emotions rather than disciplined investing. At Paradigm, our clients are our primary focus. We are prepared to adjust to any challenges ahead, while practicing a strategic approach that is best for each investor’s unique situation. We, at Paradigm, are here to answer your calls and questions as a team and look forward to our continued partnership in 2022!