Following a favorable market outlook during the second quarter based on falling COVID-19 cases and an accelerated economic reopening, some concerns arose during the third quarter that caused investor uncertainty.  Worries about inflation, supply chain shortages, a tumultuous withdrawal from Afghanistan, political debate over the debt ceiling and fiscal spending measures, and regulatory tightening made headlines, resulting in a loss of some gains seen earlier in the quarter by late September. Equity markets ended predominately flat for the quarter, yet year-to-date returns remain strong. Although there is a positive outlook on the global economy, emerging market equities declined over tightening concerns in China. While prices for many commodities stabilized from the rise seen in Q1, oil prices soared as crude inventories shrank and demand surged. 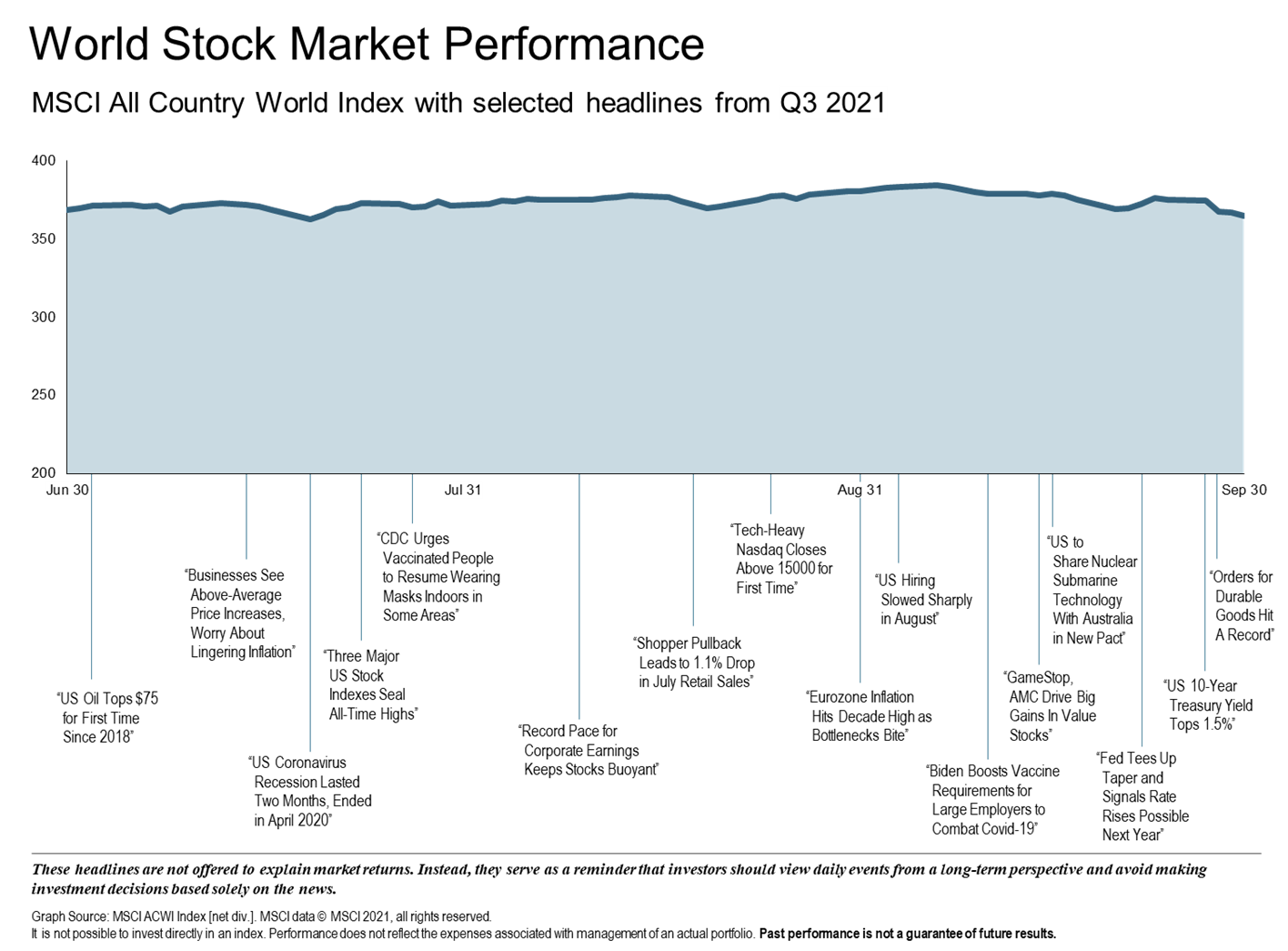 The economic reopening supported mid-cycle expansion in the U.S. and Europe, however, supply side constraints slowed momentum. Global recovery now appears to be sequential rather than synchronous. As the U.S. economy begins to show signs of deceleration due to the pace of vaccinations plateauing and the effects of the stimulus fading, an upside is expected in other areas of the world where vaccine distribution is still ramping up.

The S&P 500 hit a new all-time high in late-July as investors focused on a resilient economic recovery, ongoing support from the Federal Reserve, and strong corporate earnings. Although the market continued to climb in August, by September the tone shifted. Corporate commentary became more cautious due to supply chain constraints and the impact on corporate earnings. Politics became increasingly influential as details of a $3.5 trillion spending and tax plan emerged. Investor concern was compacted late in September when news broke that the second-largest property developer in China, Evergrande, might default on debt payments. These headlines resulted in the S&P 500 suffering its first 5% setback in almost a year. This late-quarter volatility caused equity markets to end the quarter relatively flat.

Throughout the quarter most bond indices were solidly higher as investors moved to safety following the uptick in COVID-19 cases over the summer. In late-September when the Federal Reserve announced its intention to taper Quantitative Easing this year, most of the gains seen earlier in the quarter were erased. Interest rates in the U.S. Treasury Fixed Income Market generally increased. The 5-year Treasury note rose 12 basis points while the 10-year Treasury note increased 8 basis points.

While many commodity prices either stabilized or declined following the upsurge in Q1, oil prices continued to climb. Although the increase lessened in the third quarter, oil has increased more than 50% over the last 6 months.  The Bloomberg Commodity Index Total Return returned 6.59% for the quarter and was up close to 30% year-to-date. Natural Gas and Cotton were the best performers while Silver and Soybean Meal were the worst.

We are currently in a mid-cycle phase. On a positive note, financial conditions are providing companies access to capital, there are encouraging signs that the spread of the Delta variant is slowing, and market performance in the third quarter reflected the continued improvement in the macroeconomic outlook. As we move towards the end of 2021, some risks to consider are: future rate hikes as inflation is a concern, a disruption in the U.S. legislative process could bring about volatility, market anxiety could escalate if data shows accelerated wage growth or spikes in consumer prices, and markets could react poorly to decelerating growth in China.

We, at Paradigm Wealth Management, understand the importance of your financial security. During volatile times, it’s important to remember that a well thought out, diversified approach to investing will weather even the most challenging times. We value the opportunity to partner with you as you navigate the ever-changing economic environment. As always, we are eager to meet with you, either in person or remotely, and look forward to providing you with excellent service and industry expertise.