At the close of 2021, emerging COVID variants, inflation concerns, and waning stimulus were at the forefront of investors’ mind. By mid-February, all eyes were on the Russia – Ukraine conflict which escalated into an all-out Russian attack on Ukraine that began on February 24th. 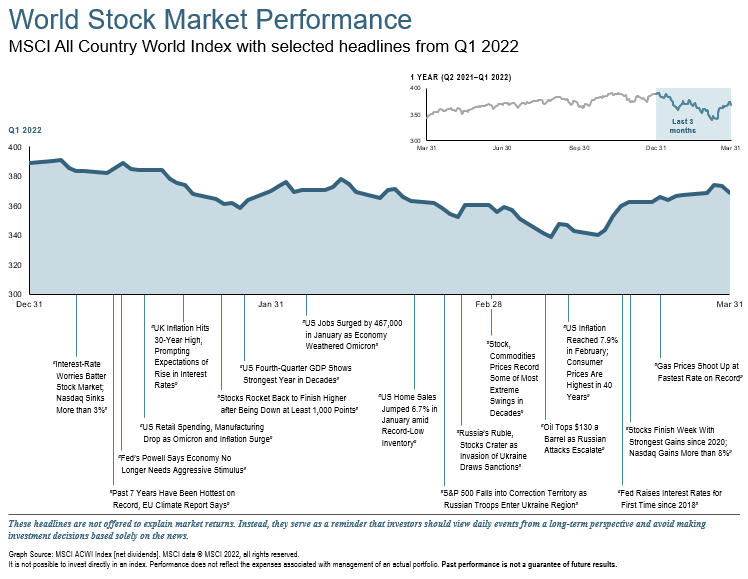 “The Great War” came to an end just over a century ago. It was a war of such brutality, the world believed nothing so horrific could happen again. That sentiment was incorrect and second “Great War” occurred just two decades later. Today – seven decades later after “The Great War” – the world is once again facing a geopolitical crisis that poses long-term ramifications. First and foremost, we mourn for the Ukrainian people who have been thrust into this horrific war, facing tragic circumstances that are hard to contemplate. As history unfolds, it highlights several trends, including private power, deglobalization, and decentralization that have resulted from or have been accelerated by this unnecessary conflict.
This is the first war where the private sector has played a major role – social media has provided a frontline view of the horrors of war, tech companies serve in the war effort by either preventing or providing internet access, and S&P 500 companies have proactively pulled their brands out of Russia, anticipating official sanctions. The financial crisis, followed by the pandemic and its resulting supply chain issues, have raised questions about globalization. This conflict may be the final straw as countries become increasingly concerned about the vulnerability that goes hand-in-hand with global interdependence. Should deglobalization begin to unroll, central banks may become concerned with the ramifications of decentralization. The U.S. has frozen Russia’s access to the $6 trillion it stored at the Federal Reserve, and while it is a move most feel is justified, it may set a concerning precedent in the eyes of foreign central banks.

The unpredictability surrounding the Russia-Ukraine war, in addition to rising global inflation, can cause fear and a fixation on the negative. Although there are headwinds as we begin the second quarter, having a diversified plan in place will help buoy against volatility and uncertainty.

Global Economy
The Russian invasion of Ukraine caused markets to fall 6.5% over the first quarter. Europe’s trading relationship with both countries could lead to inflation and affect the overall growth outlook. The European Union is most vulnerable to adversity resulting from the war in Ukraine. Russia provides the EU with approximately 40% of natural gas and 25% of oil imports while Ukraine exports of raw materials and agricultural products have grown 50% over the last five years. With commodity prices already experiencing a multi-year high, the Russian invasion has worsened an already struggling supply chain. So far, 20 Central banks have raised interest rates to control inflation without suffocating economic growth or causing a recession.

U.S. Economy
The U.S. stock market experienced elevated volatility during the first quarter. After closing at an all-time high in early January, the S&P 500 fell more than 12% as inflation spiked and expectations for interest rate hikes were raised. Most of those losses were recovered later, with the market ending the quarter down 4.95%. As expected, the Fed lifted rates by .25% in March and reduced the GDP forecast from 4.0% to 2.8% in response to supply and demand imbalances, high energy prices, and broader price pressures. Additional interest rate increases are expected throughout the year as the Fed tries to balance the risk of doing too little verses doing too much. On a positive note, the job market is strong and a surplus of cash from earlier stimulus efforts has allowed consumers to absorb some higher pricing.

Looking Forward
Although the first quarter of 2022 lacked the positive returns that we have been experiencing for over a decade, it is important to maintain perspective. Equity declines occur often and pullbacks of 5-15% occur nearly every year and are considered normal volatility. Stock market corrections are more common during a mid-business cycle phase and often are relatively short-lived. Swing days of price gains or losses greater than 1% tend to cluster together. When trying to “time” the market, investors are just as likely to miss the best days as they are to avoid the worst. Although we have seen elevated volatility thus far this year, the risks are not new. Inflation, interest rate hikes, and geopolitical conflict are ongoing issues that will continue to affect the markets, as they always have. The performance of different assets has varied widely from year to year including, returns among asset classes moving in the same direction. Asset allocation is the most effective tool for mitigating equity market declines and diversification tends to ease the effect of drawdowns.

Times of uncertainty are when we at Paradigm Wealth Management can be of most service to you. As always, we will continue to monitor your holistic portfolio and assess the environment around us to determine how it may impact your personal situation. Our doors are always open. Please do not hesitate to reach out with any questions or concerns.