The last two years have been unpredictable, from both a social and economic viewpoint, and we have experienced many unprecedented events that will have a lasting impact worldwide. As we pass the half-way mark of 2022, this trend appears to be continuing and unfortunately the news is bleak no matter which source you use to remain informed. High inflation, ripple effects from the Russia-Ukraine conflict, and the Federal Reserve raising interest rates more aggressively than anticipated have challenged financial markets and the global economy. As a result of consumer and business confidence waning, U.S. stocks officially moved into bear market territory (which is defined as a decline of 20% or more) during the second quarter. The headwinds that were predicted at the beginning of the year have held their strength making this a trying time for investors in the near-term. Although, from a financial perspective, the last three months has had few positives, historically, a well-diversified investment plan is the best approach to long term growth. 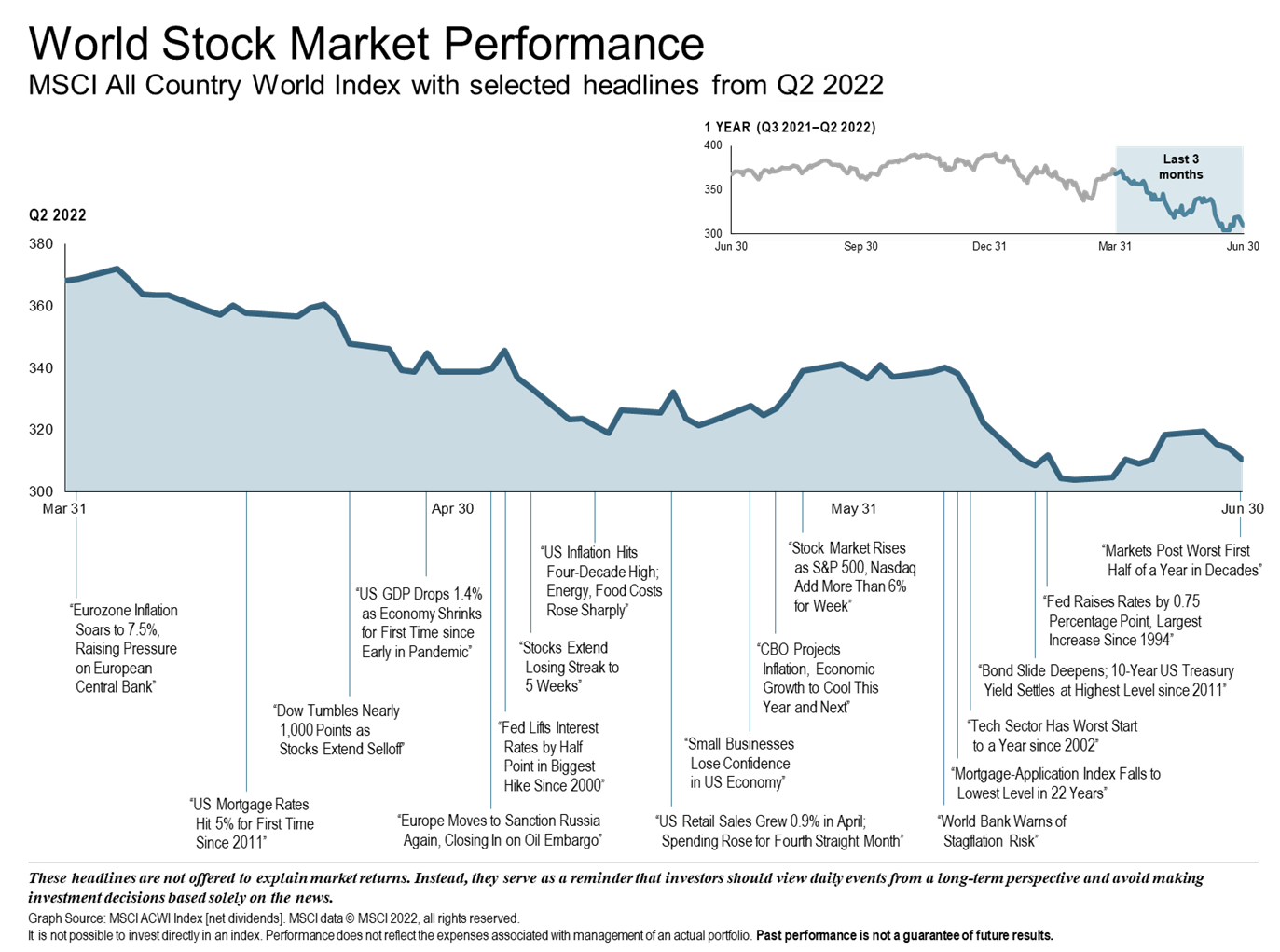 This year has proven to be a tough one worldwide. Globally, stock markets have struggled as central banks in 24 countries have raised interest rates to combat inflation. Geopolitical conflict in Eastern Europe has affected energy prices while China’s zero-COVID policy has impacted supply chains. Global manufacturing activity exhibited positive yet slowing growth rates during Q2 while continuing deglobalization pressures are likely to affect stability going forward. The risks during the second half of the year remain the same as continued conflict between Russia and the Ukraine and weakening liquidity growth may impact volatility in markets worldwide.

The U.S. economy had a difficult 2nd quarter. In May, inflation rose at an annual rate of 8.6% which is the fastest rate of increase since December 1981. In an attempt to curb rapidly increasing inflation, the Federal Reserve raised rates by .50% in May and .75% in June. The U.S. stock markets responded to these increases, in addition to other outside risk factors such as supply chain issues and geopolitical conflict, with sharp declines. Historically, it is rare for U.S. stocks and bonds to both be negative at the same time. The S&P 500 declined by – 16.1% over the 2nd quarter while the tech-heavy Nasdaq was down -30% over 6 months as of the end of June. In addition, the Bloomberg U.S. Universal Bond Index experienced a -5.1% decline and the U.S. GDP was down -1.6% over the 1st quarter. Despite these adverse conditions, recent data indicates that there is excess inventory across industries as well as decelerating wage growth and auto prices, supporting the thought that inflationary pressures will begin to lighten.

Recent declines across almost all markets has likely induced incertitude for many. We realize that a bear market can cause worry, and this may occasionally result in decisions spurred by fear. It is important to note that since 1926, U.S. stocks have returned an average of 22.2% in the first year following a 20% decline. And, despite 12 recessions and 12 bear markets since 1947, the S&P 500 has returned 12.57% annually. The market is forward looking and tends to lead the economy. Therefore, attempting to time the market in anticipation of a recession (which is only identified in hindsight using data that is months old) is not a good idea. At Paradigm Wealth Management we strive to provide transparency. We understand our clients’ individual needs and concerns and remain committed to providing a customized solution for every financial portfolio. Please reach out if you have any questions. We are always available for a conversation!