As 2022 began, waning stimulus, inflationary headwinds, and new COVID-19 variants were top concerns amongst investors. Shortly into the new year Russia attacked Ukraine, resulting in some unpredicted global ramifications that intensified economic concerns. Price spikes in oil and natural gas spurred central banks to begin the painful process of rate hikes in an attempt to slow inflation that became a looming threat following the massive government stimulus programs initiated during the pandemic. As the year progressed, the war raged on, inflation reached record-high levels, severe supply shortages throughout the world continued, and stock market volatility became the norm rather than an anomaly.

After three straight quarters of negative returns, the fourth quarter ended on a slightly good note with 10 of 11 sectors experiencing positive returns. The U.S. Stock Market experienced gains of 7.18%, while developed international stocks and emerging markets saw slightly higher gains of 16.18% and 9.7% respectively. The Federal Reserve continued to raise rates in November and December but denies what most economists believe is inevitable; we are headed for a recession. Late in the quarter, the U.S. Treasury yield curve inverted to its lowest level since 1981. Although there is not a direct correlation between an inverted yield curve and a recession, it is often a precursor to the latter. 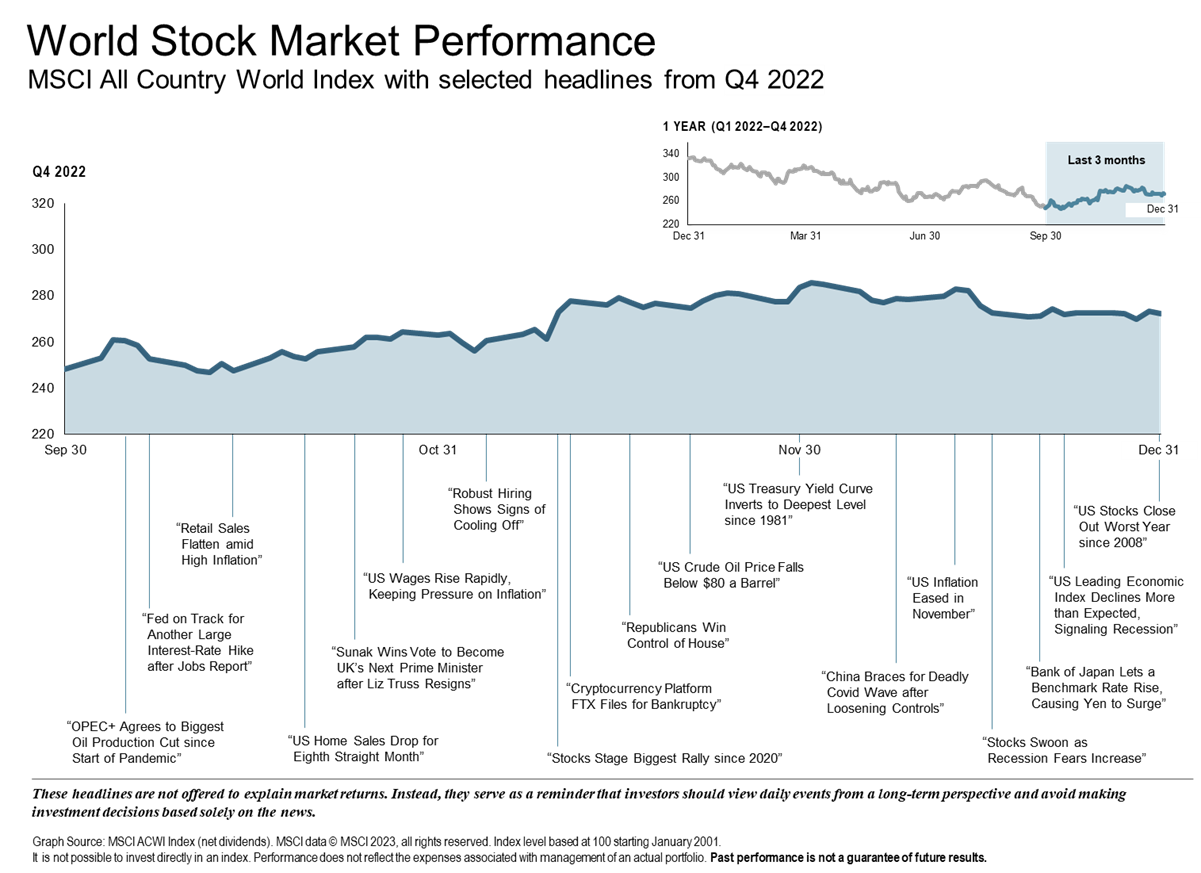 Leading economic indicators across the world’s largest economies slowed during the second half of 2022 indicating weak global economic momentum as we begin 2023. Europe may have already tipped into a recession during Q4, largely due to exceptionally high natural gas prices and aggressive monetary tightening by central banks. China’s zero COVID policy and a contraction in the real estate sector have significantly affected growth. Although China is relaxing its policies, a long road to recovery is expected. Global short-term interest rates continued to rise throughout most of the world resulting in the highest levels seen in a more than a decade.

The U.S. equity markets posted positive returns for the fourth quarter following three quarters of decline. After over a decade of growth stocks outperforming value stocks, the tide has turned. Large value stocks had the highest return rate for the quarter at 12.42%.  In recent years, the unusually large gap between value and growth stocks was largely due to the high-flying tech giants. Although leadership between value and growth tends to shift in multi-year cycles, it is hard to tell if the turn is the product of a short-term bear market or a continuing long-term trend. Stable U.S. treasury yields and tighter spreads pushed most fixed-income sectors into positive territory.

It’s true, the recap of 2022 sounds quite dismal. Despite challenges ahead, the consensus amongst most economists is that, after three small rate hikes in February, March, and May, the Federal Reserve will be able to stop raising rates. Many also feel that the long-term outlook for developed markets is improved from where we were a year ago. In early 2022, high equity-valuations and low interest rates did not adequately reflect the seriousness of growing inflationary pressures. Unfortunately, bear markets are inevitable. The challenge is, we do not know when they will end until after the fact. Although it was painful for investors to experience such sharp declines in 2022, lower valuations for equity investors are much more conducive to higher long-term returns in comparison to last year. Long-term investors who can withstand short-term volatility may even consider adding to their equity exposure.

Paradigm Wealth Management is here to help take the worry out of investing. The purpose of having a diversified, well thought-out investment plan is so that you can relax. We remain vigilant towards risks to your portfolio and thank you for your continued confidence and trust. As always, please do not hesitate to reach out with any questions.